Handsome, unique and sought-after by hunters, meet the antelope of the spiral-horned family.

The spiral-horned antelope of the African continent fall under what is known as ‘the bushbuck tribe’, or tragelaphini. Members of the tribe include the bushbuck, sitatunga, nyala, mountain nyala, lesser kudu, greater kudu, bongo, common eland and derby or giant eland. These antelopes differ from all other African antelopes in having a non-territorial social or mating system and, of course, are distinguished by the spiral shape of their horns.

Trangelaphine antelopes come in three different models: the forest-antelope model, characterised by a narrow body, deep chest, rounded back, and hindquarters being more developed and higher than forequarters; the broken-ground jumping model, which is tall and lean with long, equally developed limbs and a level back; and the oversize ox model, a massive animal more like an ox than an antelope, which makes it a slow runner but a great jumper. If you are hunting spiral-horned antelope in South Africa, your options are bushbuck, nyala, greater kudu and common eland.

The bushbuck (Tragelaphus scriptus), part of the forest-antelope model, is a colorful, sizable antelope that hides in patches of woody vegetation all over the continent. With a rounded back and powerful hindquarters, the bushbuck ram averages at a weight of 88 – 176 lbs (40 – 80 kg) and a height of 28 – 40 in (70 – 100 cm). The horns are nearly straight, with only one twist, and typically range between 10 to 22 in (26 – 57 cm). Their coats are individually and geographically variable, with eastern and southern forms (as you would encounter in South Africa) being yellower with fewer markings. 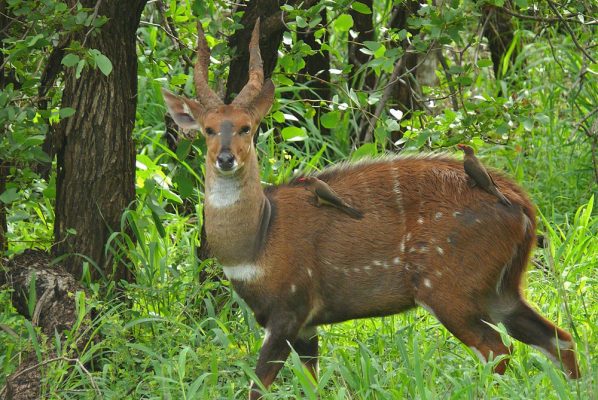 From sea level to mountain moors at 10,000 ft (3000 m) and the edges of rain forests to patches of gallery forest and bush near water in the sub-desert regions, bushbucks inhabit any wild areas of sub-Saharan Africa where there is cover to conceal them. They depend on this concealment to avoid predators, and tend to only venture into the open at night to feed. A bushbuck is not only effectively camouflaged while standing in cover, but also while lying down in the open at night. Hyenas and lions have been seen passing within 10 yd of bushbucks plainly visible through a starlight scope.

You will almost always find the bushbuck near water, since the dense cover where its spends its days is most abundant along water courses. Both grazer and browser, the bushbuck eats tender green grass but mainly browses herbs and foliage of shrubby legumes. Fond of fruits and flowers, it often forages under trees where monkeys and hornbills are feeding.

The bushbuck is the only solitary, non-territorial African antelope; neither sex defends any part of its home range, and ranges may largely or completely overlap. However, each adult’s home thicket is an exclusive core area where it retires to rest and ruminate between bouts of foraging. Although bushbucks do not herd together, up to a dozen may feed peacefully in the same clearing in the late afternoon. As bushbucks from the same neighborhood are all acquainted and often greet one another in a friendly manner, it would be more accurate to call this animal loosely and casually sociable, kept separate by feeding and anti-predator strategies that favor separation of individuals.

The nyala (Tragelaphus angasii) is also part of the forest-antelope model and carries a bushbuck ‘body plan’, but with more extreme gender differences. Bulls average at a weight of between 216 – 275 lbs (98 – 125 kg) and a height of 42 in (106 cm). The horns range from 24 to 33 in (60 – 83 cm) with 1.5 to 2.5 twists. The males boast longer, shaggy coats, including a dark fringe from their throats to their hindquarters, and the longest spinal crest in the tribe. Their upper bodies and limbs are dark, charcoal grey, with tan-colored lower legs. They have less stripes than the females, or occasionally no stripes at all. 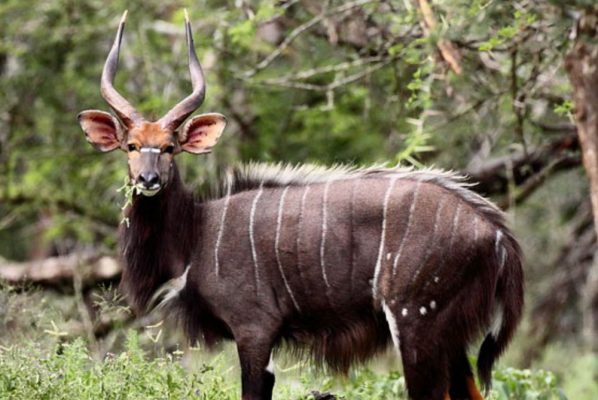 Found only in south-eastern Africa, the nyala’s range has been great reduced. They are closely tied to thickets and densely wooded lowlands generally near water, with access to high quality grassland. Adapting to seasonal changes, they graze on fresh green grass during the rains and browse leaves, various fruits, and herbs during the dry season, drinking daily.

Much like the bushbuck, nyalas spend the day in or near cover, emerging at night to feed in grassland. During the spring and summer months, they spend the hottest hours in deep cover, typically standing motionless and almost invisible beside trees. During the cooler winter days, they rest in light shade in the open. Most nyalas are inactive between midnight and dawn.

The basic social unit is a female with her latest and next-to-latest offspring. Herds consist of two or more units. Only females guarding hidden calves stay alone. Although herds appear temporary and fluid, daughters tend to stay home and continue association with their mothers after becoming mothers themselves. Males 1.5 to 3 years old associate even more casually than females, in twos and threes, rarely up to nine males, and herd membership seldom remains unchanged for even two hours. Males become more solitary as they mature in their sixth year. The sexes stay segregated except when an estrous female is located, or when nyalas aggregate (up to 30, rarely up to 100) on a green pasture, at water holes, or in fruiting trees.

The greater kudu (Tragelaphus strepsiceros) is the second-tallest antelope, with the most spectacular horns. Part of the broken-ground / jumping model, these antelopes are narrow-bodied and long-legged, with bulls weighing in at 418- 693 lbs (190 – 315kg) and reaching 48 – 60 in (122 – 140 cm). Kudus have proportionately small heads with huge, cupped ears. 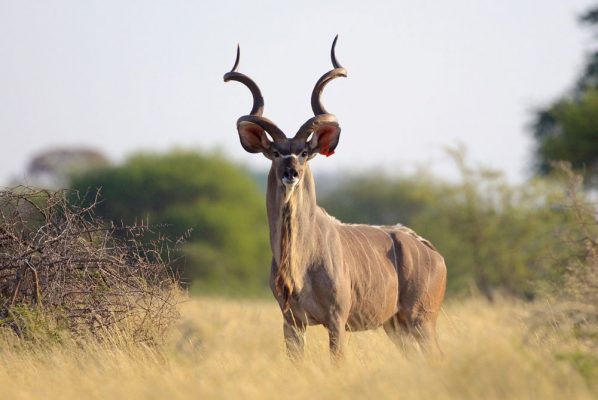 The pièce de résistance, the horns, boast 2.5 (rarely, 3) twists and average 48 in, record 72 in (180 cm). Their coats are smooth but for the beautiful spinal crests and shaggy beards. Their colors range from red-brown to blue-grey, with males turning darker with age. Six to ten torso stripes, prominent white nose chevrons, small cheek spots, dark garters on the upper legs and black-tipped tails with white undersides complete the handsome image of the kudu.

Greater kudu roam much of eastern and southern Africa, from Chad nearly to the Red Sea, south to the Cape Province, west to Namibia and north to mid-Angola. Adept at concealment and catholic in diet, it is one of the few large mammals that thrives in settled areas (in the scrub woodland and bush that reclaims abandoned fields and degraded pastures). Kudu are still quite common in southern Africa, but in East Africa its lowland habitat has been mostly expropriated, leaving only isolated populations on some mountains.

Being larger than the nyala and significantly larger than the bushbuck, the kudu’s need for concealment limits its habitat choices, partially offset by an ability to live in waterless areas. The kudu’s preferred habitat includes mixed scrub woodland, acacia, and mopane bush on lowlands, hills and mountains. A gourmet browser, it eats many kinds of leaves, herbs, fallen fruits, vines, tubers, succulents, and flowers, sometimes varied with a little new grass.